A downloadable game for Windows, macOS, Linux, and Android

Good morning! May I take your order?

One Hell of a Coffee Shop is a short, kinetic Visual Novel where you get to order some surely overpriced coffee at your friendly neighborhood coffee shop and have a chat with its barista!

The game was made for the O2A2 (Again!) Game Jam and features:

But why stop there? Therefore, it also features:

So, what are you waiting for? Go get a virtual coffee today!

I really enjoyed this game. I knew that it was a loop but why were the names changed every day?

hi, thank you for playing!

on name changes: it is basically a one prolonged reference to philosophy in general. Because it's implied that the player is an amnesiac god of sorts,  name options are based on famous philosophers for their main pursuit was to observe life and existing reality, but they were also capable of writing their own fictional pieces. The name changes also were there to give the player an unsettling vibe from the very beginning of the game to add suspense and hint that the coffeeshop is not just a coffeeshop, it's a place outside reality the player is visiting inbetween their lives.

It was my first time playing vn and I enjoyed it. I love the art and music. Thank you for creating this game ♡♡♡

Man its like Ai dungeon you wont know what she will say next.

Unique and atmospheric - I loved it!

I was caught off guard at first but, I love that bit of surprise as I played through the game. I was confused about the names and was hoping they would somehow tie together or have some specific meaning. I however was pleasantly surprised at the direction the plot went in. I feel the use of music and atmosphere was well done.

well, yeah - the names kind of have a meaning? they are a one prolonged reference to philosophy, they're meant to give the player an 'off' vibe, and then Lucy tells the player that the coffeeshop is essentially a place the player visits inbetween their lives. I thought it would be obvious to spot since games like Nier:Automata made philosophers like Jean-Paul Sartre and Simone de Beauvoir pretty well-known :D

if you're curious about how they were chosen, I've answered that in the discussion below.

thank you for playing!

Oh, I see, thank you for explaining! It was unsettling and different to pick a different name each time. I like what you were doing with it. I'll definitely take a look at the philosophical meaning a bit more as that sounds interesting. Great Visual Novel overall!

At first I was confused, but then I got curious and at the end I was "ooh" 👌

I really enjoyed this game. The loop was clever and made the story feel longer. At some points, I really felt like spending days in that cafe which made it easier to create a bond with the characters.

I loved the art and atmosphere of this game, and I'm definitely going to play again and see what details I missed! Great VN!

The art is very pretty and the simple but effective gameplay hooked me right away! I've also found the music playing in my head multiple times since I played the game, it's quite cozy.

Great job! What happens near the end I won't call a plot twist , since it's more like an Epiphany to me.... I like the work a lot, and as usual for the good stories I like, I love to imagine myself in it, and indeed during my 15min of break I crafted a beautiful journey through your beautiful coffee shop!

What would I say each time I visit it? As someone who has committed all the sins as in the nine circles, maybe I would drop some casual comments on my past sins. But still, I had my conscience. And it was because of this I was left in constant inaction, constant regret, forever trapped in this circles of self-reproach, and therefore unable to create my own world. Once I realized all this, I also realized I had only the coffee shop left. Ah Lucifer, how cunning of you to disguise yourself as the charming Lucy, enslaving me in your kingdom! In great pain, I decided to erase my only happy memory of the coffee shop. The world crumbled and I saw a beam of light in the cracks. Ahh, how splendid. In the end, it was a beautiful journey through hell.

oh wow thanks
i'm not the writer but it's very flattering to read that you engaged and empathized with the story so much!
i'm sure lucy'd be sad to let you go... yet she also won't accept keeping you here forever
good luck with your journey onward, outside the comfy coffee shop walls!

Just finished playing to the end. I really enjoyed the music and I love the design of the character's sprite. Thank you for making this visual novel.

This was an unusual experience for a VN but it was amazing in every way.

This was so so good! I do love a VN meta-narrative, and it had such an intriguing atmosphere thanks to the art and music. The writing was really fun to read too!

This was one hell of a ride, this game gave me goosebumps. The art and the music and the writing are all amazing. I don't think I understood all the references, though (or not all the names are references?)

ohhh your words flatter my heart!

on name references: it is basically a one prolonged reference to philosophy in general (because it's implied that the player is an amnesiac god of sorts, I thought about giving name options based on famous philosophers because their main pursuit is to observe life and existing reality, but they are also capable of writing their own fictional pieces). so, they're all references, I wanted to represent men and women equally but I also didn't want them to be seen as a "pick your gender" choice in every run so for some runs I paired two women or two men.

the names are: Rene (Descartes), Hannah (Arendt), Mary (Wollstonecraft), Edmund (Burke), Zeno (of Elea),  Philippa (Foot), Hypathia (of Alexandria), Ayn (Rand), Simone (de Beauvoir), Jean-Paul (Sartre), Soren (Kierkegaard), Albert (Camus), Karl (Marx), Adam (Smith), Rosa (Luxembourg) and Peter (Kropotkin). Some of them were paired because the theme of the day fit (like Rosa Luxembourg and Peter Kropotkin for the one that mentioned the USSR and they were the communism/socialism ideologists; and Soren Kierkegaard and Albert Camus for the one with an absurdly long order because they were the absurdists), some of them were just out of the blue because I needed to fill the gaps (I mean I had a philosophy course in university but I was definitely not a philosophy major).

anyway, thank you for the comment and for playing!

This was really weird entry, but in a good way. 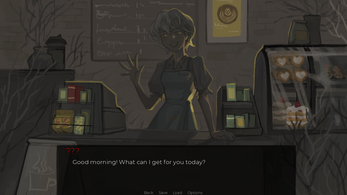